The new BiGi active from January 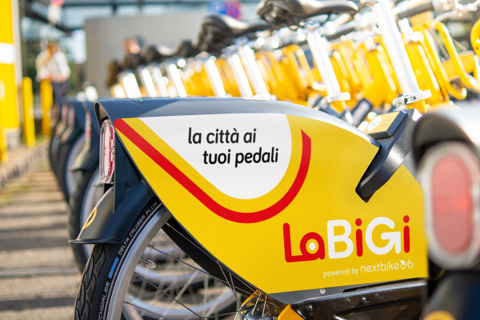 Bergamo, January 11, 2022 - The gradual replacement of bike stations has already begun in the city for the installation of Bergamo's new bike sharing system, which will be active starting January 13. The new service, managed in collaboration with nextbike GmbH, European leader in bike sharing services, presents many new features for citizens.

The new system will allow the use of bicycles both in "station-based" mode, which provides for the return of the vehicle to the bike station, and in "free-floating" mode, and will have 30 "physical" stations (equipped with racks) and 30 "virtual" stations identified by specific areas marked on the ground. The map of the new bike stations shows an extension of the service from the city center to the more peripheral areas, the stations available for the pick-up and drop-off of vehicles will increase from the current 23 to 60.

Yellow is the distinctive color of the new service, present on the bicycles and at the bike stations with the new logo, readable and easily recognizable. The bicycles are equipped with gears, GPS technology and locking systems that will allow users to pick them up and drop them off both at the "physical" and "virtual" stations. In addition to its form, the BiGi-nextbike is also enhanced in terms of numbers. There will be 350 smart bicycles arriving from Germany, a number more than tripled compared to the existing service, to which will be added another 20 pedal-assisted bicycles to be used mainly on the route from the center to Bergamo Alta.

App and mode of use

The BiGi-nextbike will be active all year round, 7 days a week, 24 hours a day. All 370 "smart" bicycles will be connected to a central control system on a web platform that will allow constant monitoring of their position; the daily management and maintenance of the bicycles will be overseen by the nextbike team. The bicycles will be equipped with an automated locking system managed through the app, which will allow users to deposit or withdraw them.

To use the service it will be necessary to register at www.nextbike.it/bergamo and download the nextbike app. Until the service is launched, the website will only allow registration without purchase. To pick up the bikes you will need to download the nextbike app and scan the QR code or enter the number of the bike. At that point the bike will unlock and can be used. With a single account it will be possible to rent up to four bicycles at the same time and reserve your bike, at no additional cost, for a maximum of 15 minutes before rental. Through the app it will also be possible to temporarily park the bike and pick it up later, ending the rental only at the end of the actual use.

nextbike will provide 24-hour telephone support by answering the Italian number 350 365451 for the cost of a normal call.

The tariff applied to the service will reward drop-off at the cyclostations as opposed to the "flex zone" consisting of specific streets marked on the service map and indicated by the app. Free delivery outside the bike stations and the "flex zone" will still be allowed, but at higher rates. Pedal-assisted bicycles must be returned to the columns equipped for recharging.

All La BiGi subscriptions offer 30 minutes free with every standard or e-bike rental, then rentals up to 1h for standard bikes cost 0.50 euro and after every hour 4 euro, while for e-bikes rentals up to 1h cost 1 euro and after every hour 9 euro. Purchases and renewals of La BiGi subscriptions are made on the nextbike website and app by credit card, prepaid card, Applepay and Googlepay. Any deposit outside the bike stations but within the "flex zone" will incur a surcharge of 0.50 euros.

La BiGi season ticket holders will be able to migrate to the new service by registering with the LaBiGi-nextbike system by February 2022. All active subscribers will be entitled to a voucher spendable for the new service that will include both the months of subscription not used at the date of temporary suspension of the service (November 30, 2021) and an additional month free. The Voucher can be activated simply by entering the unique code sent by e-mail. For those who did not provide an email address when subscribing to the "La BiGi-Bicincittà" subscription, it will be possible to collect the voucher at the ATB Point by presenting an identity document.

The entrusting of the service to nextbike is for 4 years, renewable for another 2 years. The total investment borne by ATB is 1.6 million euros of which 300 thousand for the infrastructure (smart bikes, physical and virtual bike stations) and about 1.3 million, just over 200 thousand euros per year, for management (fees, IT platform, customer care, logistics and maintenance).

nextbike, European leader in the bike sharing sector, is active in 28 countries and 300 cities including Bilbao, Cardiff, Budapest, Glasgow, Munich, Warsaw and Berlin. The new bike sharing, in addition to being more widespread and dynamic, will offer annual, monthly and integrated subscriptions with the city's public transport service.

nextbike is European market leader in bike sharing. We like to share and thus mobilise millions of people in a sustainable way. As micro mobility pioneers, we have been developing smart bike sharing schemes since 2004. Currently, we have established bike sharing as an elementary component of urban mobility in over 300 cities worldwide.