Seven new have been inaugurated! 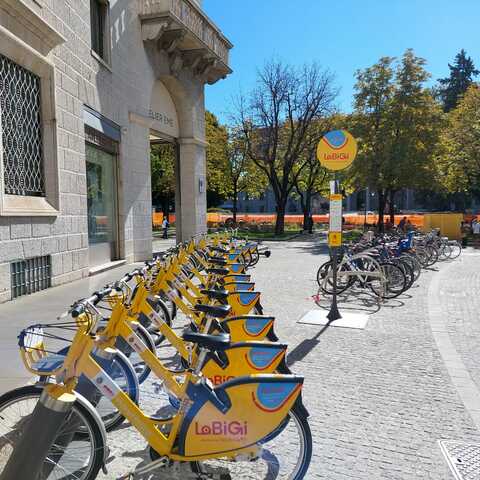 The inauguration is part of the events planned for European Mobility Week and makes the city's sustainable mobility even more accessible thanks to the 57 new docks and 40 bikes.

These stations have been financed by the City of Bergamo, bringing to 38 the total number of physical stations available to users, plus another 30 virtual stations that complete the service.

The new stations are in Via Risorgimento and Via Curie in Loreto, Via Carducci intersection with Via Leopardi in the San Paolo neighbourhood, Goisis Park in Monterosso, Via Giacomo Radini Tedeschi and Don Orione in Redona, and Esselunga in Celadina.
Furthermore, with the completion of the road works, Piazza Matteotti virtual station has been converted to a physical station, with 19 new docs.

This latest extension improves the coverage of the service, which now extends from the city center to the more peripheral areas. At each station, it is possible to release the bicycle either in "station-based" mode or in "free-floating" mode.

Info on the service

Data as of September 2022 confirm that people from Bergamo are enjoying the service, with over 7,400 rides in the first 20 days and peaks of up to 500 rides per day.

The ride peaks during the week are between 8 a.m. and 10 a.m. and between 7 p.m. and 9 p.m., while on the weekends usage is spread throughout the day demonstrating the versatility of LaBiGi for both commuters and leisure.

Trip ratings register 5 out of 5 stars for 75 percent of users and 4 stars for 17 percent.

The LaBiGi30 promotion continues: new users can us La BiGi for free for 30 minutes by simply using the code "labigi30" on the app.

nextbike by TIER is the European market leader in bike sharing and stands for a multimodal and socially fair transport transformation. In over 300 locations in more than 20 countries, nextbike by TIER has established bike sharing as an elementary component of livable cities and regions. Integrated into public transport, the company offers millions of users the ideal means of transport for their daily needs with pedal bikes, e-bikes and cargo bikes. nextbike by TIER is a brand of TIER Mobility SE, the world's leading shared micro-mobility provider.