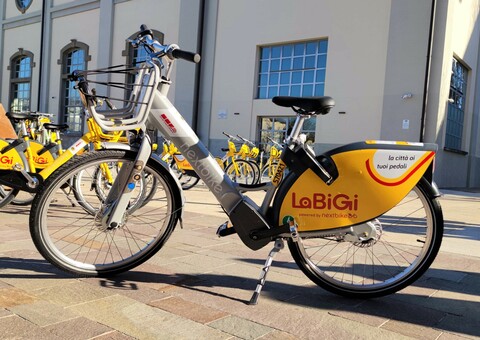 Starting from April 22 the new ebike service is active in Bergamo!

Ebike service completes the new system of bike sharing in the city, inaugurated at the beginning of the year, which allows the use of bicycles both in "station-based" mode, which provides for the return of the vehicle to the bike station, and in "free-floating" mode, and has 30 "physical" stations (equipped with racks) and 30 "virtual" identified by specific areas delimited on the ground. The basic fare, recommended for occasional users and tourists, is 2 euros for the first 30 minutes, 3 euros for the next 30 minutes and 9 euros for the remaining time. Monthly or annual subscription provides, as for the standard rental, free of charge for the first 30 minutes, then the rental up to 1 hour costs 1 euro and after each hour 9 euros.

nextbike is European market leader in bike sharing. We like to share and thus mobilise millions of people in a sustainable way. As micro mobility pioneers, we have been developing smart bike sharing schemes since 2004. Currently, we have established bike sharing as an elementary component of urban mobility in over 300 cities worldwide.